Within the light that out of spirit depths
Weaves germinating power into space
And manifests the gods' creative work:
Within its shine, the soul's true being
Is widened into worldwide life
And resurrected
From narrow selfhood's inner power.

The light from spirit depths
Strives to ray outwards, sun-imbued;
Transformed to forceful will of life
It shines into the senses' dullness
To bring to birth the powers
Whereby creative forces, soul-impelled,
Shall ripen into human deeds.

The Philosophy of Spiritual Activity
GA 4 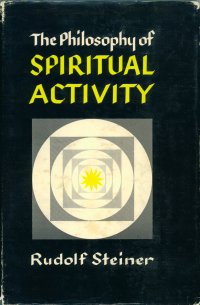 This book, written in 1894, is a fundamental treatment of Steiner's philosophical outlook. Together with Truth and Science and The Riddles of Philosophy it might be considered as one third of a philosophical trilogy. The emphasis of the book is not on “freedom” as ordinarily understood, but is on “freiheit” or what might be termed freeness. This freeness is a self-starting, self-directing activity of a spiritual sort. Here, the term “spiritual” is used in a sense not incompatible with the use of the word in the tradition of the German idealistic school of philosophy.

The main divisions of the book are: Knowledge of Freedom, The Reality of Freedom, and Ultimate Questions.

This edition is translated from the 2nd German edition of 1918 by Rita Stebbing, and is bound together with Truth and Knowledge.