The Case for Anthroposophy
GA 21 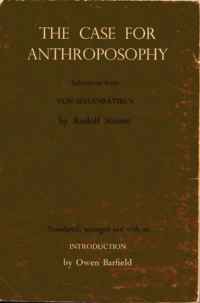 The Case for Anthroposophy contains English translations of eight of the eleven essays appearing in the German original entitled Von Seelenraetseln. The three sections in the German original which do not appear in the English translation are: Max Dessoir on Anthroposophy, Franz Brentano (a memorial address), and The Separation of the Psychological from the Non-Psychological in Franz Brentano.