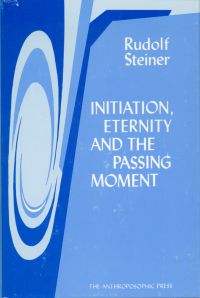 These lectures delineate the difference between ordinary and initiate consciousness. Steiner distinguishes between the great initiates who guided humanity by imparting truths gained outside the body, and the Christ, who gave the earth its meaning by working from within the physical body.

The seven lectures presented here were given at Munich, August 25–31, 1912. They were revised for this edition by Gilbert Church, Ph.D, and are from the lecture series entitled, About the Initiation, About Eternity and the Moment, About Spiritual Light and Life's Darkness. In the Collected Edition of Rudolf Steiner's works, the volume containing the German texts is entitled, Von der Initiation von Ewigheit und Augenblick. Von Geisteslicht und Lebensdunkel