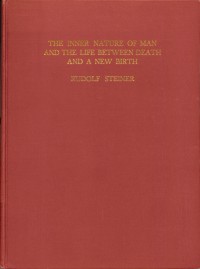 Given just before the start of World War I, Rudolf Steiner here describes the panoramic reality of the spiritual worlds encountered by human beings after death. He speaks of the joys and sufferings experienced in those worlds by people of different characters, the vision of the “ideal human being” that souls experience, the cosmic midnight hour, the deeper causes behind such phenomena as materialism and criminality, the process leading to rebirth in the world of the senses, and why, on earth, we must lose our direct perception of the spiritual worlds. He also describes some of the methods through which direct perception of the worlds of soul and spirit can be developed.

These six lectures given by Rudolf Steiner at Vienna, Austria in April of 1914, are from the lecture series entitled, The Inner Being of Man and Life Between Death and Rebirth. They were published in German as, Inneres Wesen des Menschen und Leben Zwischen Tod und Neuer Geburt. Printed for Members of the School of Spiritual Science, Goetheanum, Class I, no person is held qualified to form a judgement on the contents of this work, who has not acquired — through the School itself or in an equivalent manner recognised by the School — the requisite preliminary knowledge. Other opinions will be disregarded; the authors decline to take them as a basis for discussion.