O Nature, your maternal life
I bear within the essence of my will.
And my will's fiery energy
Shall steel my spirit striving,
That sense of self springs forth from it
To hold me in myself.

When from the depths of soul
The spirit turns to the life of worlds
And beauty wells from wide expanses,
Then out of heaven's distances
Streams life-strength into human bodies,
Uniting by its mighty energy
The spirit's being with our human life. 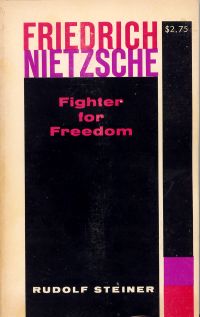 At one point in his life, Rudolf Steiner brought out an edition of some of Nietzsche's writings. In seeing that Nietzsche's ideas received a public exposure, Steiner was not identifying himself as one of Nietzsche's disciples, but rather assuring philosophical readers that this important link in the spiritual development of occidental thought should not be ignored.