Schiller and Our Times
GA 51 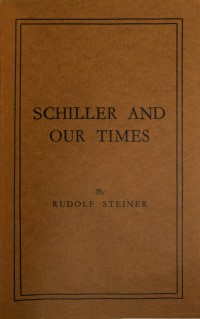 During the years 1901-1905, Rudolf Steiner presented 34 lectures at the Free University in Berlin. These nine lectures were given in 1905, and are all about Schiller. Subjects include: Schiller's life, his works, Schiller and Goethe, all of his dramas, his influence in the 19th Century, and the idealism he created.

These lectures are from the lecture series entitled, About Philosophy, History, and Literature, and were published in German as, Ueber Philosophie, Geschichte und Literatur.