Esoteric Christianity and the Mission of Christian Rosenkreutz
GA 130 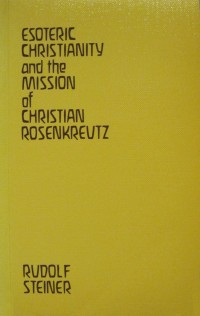 These lectures, delivered in several European cities, cover many details of the tasks and deeds of Christian Rosenkreutz and Rosicrucian Christianity, such as his influence on G.E. Lessing and Madame Blavatsky. Other related topics include the mission of Gautama Buddha on Mars, the Bodhisattva Jeshu ben Pandira and his secret connection with the Gospel of St. Matthew, the coming of Maitreya Buddha, the workings of karma, and the living etheric reality of Christ today and the future stages of his increasing manifestation to humanity.

Thirteen of the twenty-three lectures in GA# 130: Esoteric Christianity and the Spiritual Leadership of Humanity. Published in German as: Das Esoterische Christentum und die Geistige Fuehrung der Menschheit. This volume is presented here with the kind permission of the Rudolf Steiner Nachlassverwaltung, Dornach, Switzerland.