Reincarnation and Karma
Their Significance in Modern Culture
GA 135 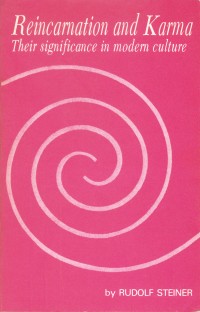 In this set of lectures, which contains some of Steiner's most important teachings on the subject, Rudolf Steiner describes the development of "feeling memory" and gives many other exercises that lead to real knowledge of karma and reincarnation. Examples are also given of how karmic effects pass between incarnations and the impact of the idea of reincarnation on our moral lives is clearly shown.

These lectures are also published under the title: Reincarnation and Karma — Two Fundamental Truths of Human Existence. Translated from shorthand reports unrevised by the lecturer, by D. S. Osmond, C. Davy and S. and E. F. Derry.