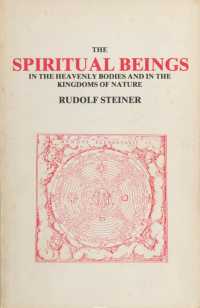 One of Rudolf Steiner's most important contributions to our understanding of the world was in the field of angelology — in the description and understanding of the work of spiritual beings, nature spirits, and elementals in the cosmos. In this classic, unparalleled work of angelology (one of only two lecture cycles he gave on the subject), Steiner leads the reader from sense experiences to the experience of the spiritual beings active in nature, in the elements and forces of the earth, and to the dynamic, cosmic working of the angelic hierarchies. He unfolds in an inspiring and magnificent vision the cosmic collaboration of the hierarchical beings in cosmic and human evolution, and shows how human beings, as angelic beings, participate in this process as the Tenth Hierarchy.

Here are ten lectures, given by Rudolf Steiner at Helsinki in April of 1912. The lecture series containing fourteen lectures that these came from is entitled, The Spiritual Beings in the Heavenly Bodies and in the Kingdoms of Nature, published in German as, Die Geistige Wesenheiten in den Himmelskoerpern und Naturreichen. Later editions of this book contain all fourteen lectures.