The Fall of the Spirits of Darkness
GA 177 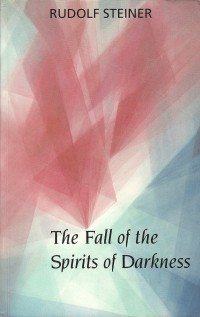 Since 1879 and into the following centuries, human minds will be influenced by backward angels — the spirits of darkness — who were forced out of "the heavens" and made their abode on earth following their defeat after a 40-year battle with the hosts of the Archangel Michael. Human beings must realize the truth of these things, not only to counter such influences within themselves, but to realize that spiritual causes lie behind major earthly happenings. From this realization, true human development can proceed, leading to the creation of social orders, schools, etc, based on real insight.

At the end of 1917, after four years of war in Europe, Rudolf Steiner spoke out in these 14 lectures on the spiritual impulses behind the Great War, behind humanity's attempts to build theoretically perfect social orders, and behind the many divisions and disruptions that would continue to occur on earth. Humanity in general was asleep to the fact that fallen spirits, cast out of the spiritual worlds, were now intensely active on earth, particularly in people's thinking and in the way they perceived the world around them. But the defeat had also ensured that a science of the spirit would always be available to humanity.