Ancient Myths
Their Meaning and Connection with Evolution
GA 180 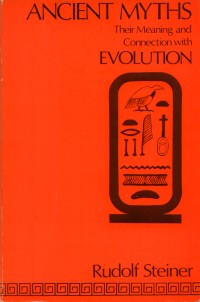 Starting with the myths of Osiris and Isis and the Greek gods, Steiner shows how humanity has been deserted by the Gods and made independent. But it is only in our thinking that the Gods have deserted us. They are still present and active in other realms; and we can have access to them through Imagination, Inspiration, and Intuition.

Seven lectures given in Dornach, 4th to 13th January, 1918. Translated from shorthand reports unrevised by the lecturer, by M. Cotterell. These lectures are from the lecture series entitled, Mystery Truths and the Christmas Impulse. The original German text of these lectures are published under the title: Mysterienwahrheiten und Weihnachtsimpulse. Alle Mythen und ihre Bedeutung. Geistige Wesen und ihre Wirkungen (Vol. 180 in the Bibliographical Survey, 1961).