The Influences of Lucifer and Ahriman
GA 191 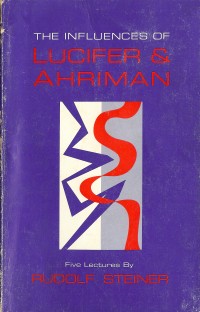 In these lectures, Rudolf Steiner focuses on the vital task of developing a right orientation toward a free spiritual life. With great compassion and understanding he shows, in telling examples, how humanity must walk a conscious middle path between the two “tempting” powers of Lucifer and Ahriman. He describes the incarnation of Lucifer, in the third millennium B.C., from which flowed not only the wisdom of paganism but also the intellectual consciousness we enjoy today. Ahriman is shown to be approaching humanity through phenomena such as materialism, nationalism, and literalism in preparation for his incarnation in the millennium now opening. It must not be thought, however, that these two powers work apart: on the contrary, they work more and more together. Our task is to hold them in balance, continually permeating the one with the other:

“Lucifer and Ahriman must be regarded as two scales of a balance, and it is we who must hold the beam in equipoise. How can we train ourselves to do this? By permeating what takes Ahrimanic form within us with a strongly Luciferic element.”