In secret inwardly to feel
How all that I've preserved of old
Is quickened by new-risen sense of self:
This shall, awakening, pour forth cosmic forces
Into the outer actions of my life
And growing, mould me into true existence.

The senses' might grows strong
United with the gods' creative work;
It presses down my power of thinking
Into a dreamlike dullness.
When godly being
Desires union with my soul,
Must human thinking
In quiet dream-life rest content. 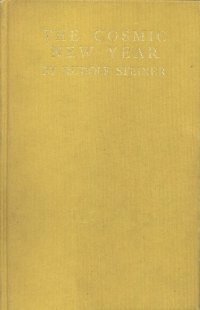 During Christmastime of 1919 to 1920, Rudolf Steiner was in Stuttgart to celebrate the end of the first semester of the first Waldorf school and participate in its Christmas festivities. During his visit, he gave not only two courses for teachers (The Light Course and The Genius of Language), but also the five lectures for Anthroposophical Society members collected in this book.

Translated from shorthand reports unrevised by the lecturer. In the Complete Edition of the works of Rudolf Steiner the original German text is published with the title: Weltsilvester und Neujahrsgedanken (No. 195 in the Bibliographic Survey, 1961).