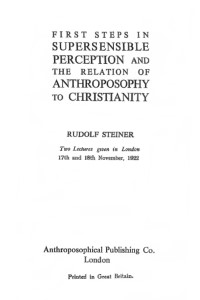 Here are two lectures given in London on the 17th and 18th of November 1922. They are from the lecture series entitled: Spiritual Relationships in the Human Organism and published in German as: Geistiger Zusammenhaenge in der Gestaltung des Menschlichen Organismus.

These two lectures were translated by D. S. Osmond from horthand reports unrevised by the Lecturer. The translation has been made from a much abbreviated German text. They are published in agreement with the Rudolf Steiner Publishing Co.