Deeper Insights into Education
GA 302a 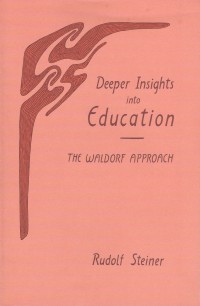 “Education must have something of the process of healing.”

The unfortunate dishonesties and inhumanities in contemporary civilization can be most fruitfully counteracted by a renewed, holistic education, argues Rudolf Steiner in these three lectures on the Waldorf approach to pedagogy.

Steiner explains why modern education requires a new synthesis of the three historical ideals of the educator: the spiritual gymnast of ancient Greece, the ensouled rhetorician of ancient Rome and medieval Europe, and the intellectual professor of more modern vintage. Of these, the most important is the formative effect of the rhetorician's cultivation of artistic speech.

“No true teaching can ever be boring,” declares Steiner and proceeds to give several examples of how the teacher can observe a natural phenomenon so intimately that its creative life can flow back to the children through his or her own words in the classroom.

The book also describes in spiritual scientific depth how the deeds of the teacher have a direct effect upon the physiological chemistry of the students. From this point of view, education is a kind of higher metamorphosis of therapy and should be seen as closely akin to the healing arts.

Steiner shows how the perception of hidden relationships between education and processes of human development can kindle in the teacher a heartfelt enthusiasm and a sense of responsibility for the far-reaching health effects which pedagogical activity can produce. These ideas will inspire teachers for their great social tasks in the face of the equally great needs of modern civilization. In this work the teacher finds strength in the image of Michael fighting the Dragon.

During the last two decades of the nineteenth century the Austrian-born Rudolf Steiner (1861-1925) became a respected and well-published scientific, literary, and philosophical scholar, particularly known for his work on Goethe's scientific writings. After the turn of the century he began to develop his earlier philosophical principles into an approach to methodical research of psychological and spiritual phenomena. In 1913 he founded the anthroposophical movement, under the aegis of which he continued research out of his trained seer-ship for the renewal of twentieth century society.