Metamorphoses of the Soul II
GA 59 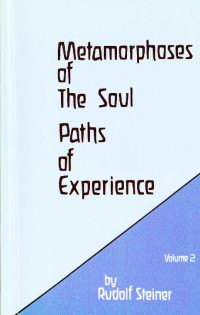 These lectures deal with spiritual science and language, laughing and weeping, mysticism, prayer, sickness and healing, the “positive” and “negative” human being, error and mental disorder, human conscience, and the mission of art.

The German title containing these lectures is Metamorphosen des Seelenlebens und Pfade der Seelenerlebnisse, published in two volumes by the Rudolf Steiner Verlag, Dornach, Switzerland (Nos. Bn/GA/CW 58 and Bn/GA/CW 59 in the Bibliographical Survey, 1961). It was translated by C. Davy and C. von Arnim. The original translation was by George Metaxa.