The Stages of Higher Knowledge
GA 12 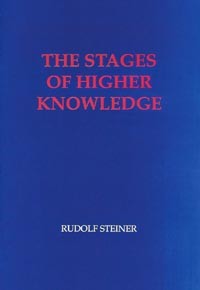 Published in German as Die Stufen der hoeheren Erkenntnis, this short book is a sequel to Knowledge of the Higher Worlds and Its Attainment. The contents first appeared in 1905 in the magazine Lucifer-Gnosis. Later, it was republished in book form.

Major divisions of this book deal with Imagination, Inspiration, and Intuition. These three terms have a special significance as indicated by the author and should not be understood as identical with commonly-used words with which they might be confused.

This volume is presented here with the kind permission of the Rudolf Steiner Nachlassverwaltung, Dornach, Switzerland. This translation is by Lisa Monges and Floyd McKnight.