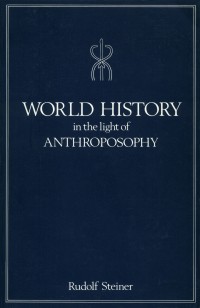 Humanity now stands in the presence of the guardian of the threshold who challenges us to take a step into a new sphere of activity, into the spiritual world. In these lectures, given concurrently with the Christmas Foundation Meeting, Steiner presents a comprehensive survey of the history of the ancient mysteries and the spiritual guidance of humanity. This prepared and strengthened the founding assembly for his courageous, decisive act of establishing the new mysteries during the Christmas Foundation Meeting.

These nine lectures, translated from the German by George and Mary Adams (the last lecture being translated by Dorothy Osmond), were given in Dornach from December 23rd 1923 to January 1st 1924, during the Foundation Meeting of the General Anthroposophical Society. In the collected edition of Rudolf Steiner's works, the volume containing the German texts is entitled: Die Weltgeschichte in Anthroposophischer Beleuchtung und als Grundlage der Erkenntnis des Menschengeistes.