Ways to a New Style in Architecture
GA 286 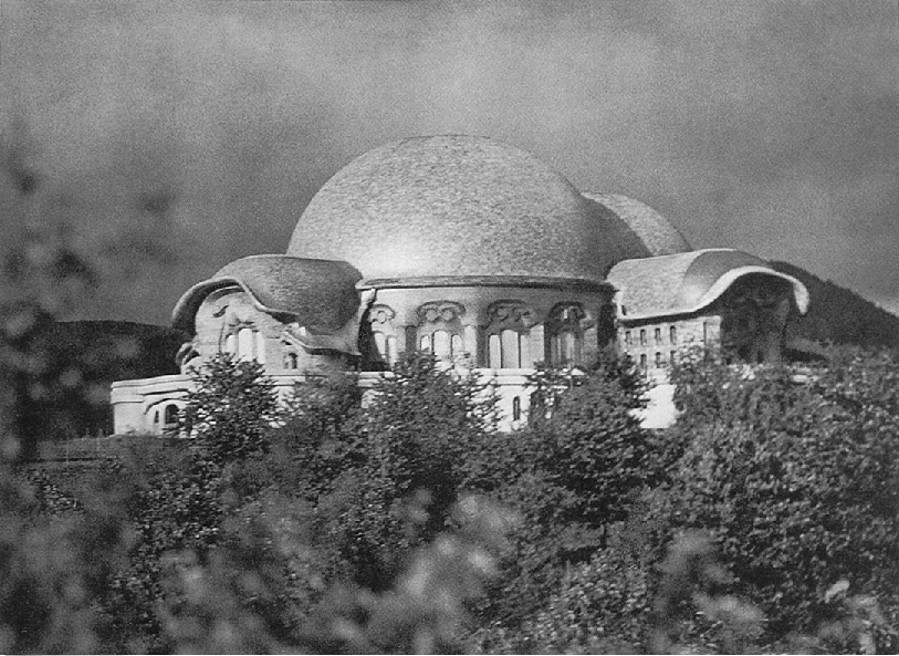 The Goetheanum, as a finished structure in all its beauty, was able to speak its message to humanity only for a few short years. The full wonder of it was revealed to but a small group of people, although day in and day out crowds of eager sight-seers wound up the hill, there to open their hearts to the breath of the Spirit, in curiosity, wonder, admiration, emotion, and — richer by yet another longing — once again to wend their way back to the world of banality. For a short span of time certain human souls had gazed at wonderland, had been raised above themselves, while others were seized by the forces of hatred and anger. Nobody was left indifferent. To those, however, who had learnt to understand the language of the forms, who had actually moulded them from the substance of wood with all its earthly solidity and at the same time ethereal flexibility — to those and to their companions in this work of regeneration, were revealed ever deeper, ever vaster world-connections under the mighty sweep of the architraves, between the capitals and plinths of the columns, whose motifs stood out with sudden boldness and novelty in the process of metamorphosis. There they wound, in and out each other, striving organically from primordial simplicity to complexity of form, and then back in a decrescendo to an inwardly deepened simplicity.

It was an architecture that developed onwards like a symphony, flowing into harmony — an architecture condensed into earthly substance from ethereal worlds, sending forth into space formative forces which were bound to take hold of the creative impulses of man and transmute them. The proportions of this architecture rendered it a dream in wood, too fair to endure, too pure not to be hated to its destruction, yet strong enough to call the new, of like nature with itself, into being.

Life, new and growing, is the Spirit's answer to the stab of death. Life, rich and abundant, is coming to flower around the urn where rest the ashes of Rudolf Steiner and round the new Building arising from the ashes of the old. The wide-flung sparks from the burning brand of the Dornach Sylvester night are becoming a spirit-seed, and those flames will be changed into spiritual life. However feeble our deeds may be, there lies, none the less, in the accomplished work of what has passed away, the Future that rescues mankind from a second death.

Therefore I have ventured to publish these lectures wherein Rudolf Steiner led us to the precincts where his spirit unfolded its creative Art, the while we worked with him in the newly built worksheds of the future Goetheanum. In the evenings we used to encamp ourselves among the planks in the great shed where the gigantic columns were put together, among the machines that shortly before had been ceaselessly working and now had come to momentary rest. There we listened to his words — words which opened up for us in all their inexhaustible fulness, new regions of his spirit, new depths of his being. We hardly dared realise that it was actually our destiny to be able to live among it all. And indeed, near Rudolf Steiner, there was no opportunity for self-indulgence. Time did not permit it nor did the ethereal intensity of his personality, which demanded, by dint of perpetual example, a ceaseless moving from one task to another. The soul had perforce to brace itself to receive the greatness and intensity of that mighty inrushing stream of the Spirit. And indeed if it had not been for the unending kindness and gentleness of one who was ever giving and creating, the soul, without having the power to assimilate all this wealth, could scarcely have endured the strain. Only if the soul were willing to accept this as a necessary sacrifice in the service of man, could it rise above the sheer intensity of the torrent — and then its power was borne as if on wings.

The work on the growing building demanded the constant presence of Rudolf Steiner, and so the earlier life of ceaseless journeys in the service of Spiritual Science was temporarily discontinued. With the erection of the building an abundance of new tasks fell upon him, tasks that he gratefully and willingly took upon himself, though only after repeated requests and urgings that were proof against all discouragement, from friends in Munich who had seen the Mystery Plays there and wanted to build a hall for them. When the building plans were rejected in Munich the pleadings continued, with the same insistence, that they should be carried through in Switzerland. This entailed many burdens for Rudolf Steiner, but his heart was full of gratitude and this gratitude and feeling of responsibility streamed with warmth and inwardness through all the words which stimulated us to work and to understand.

Listening to his words, which led us into new depths of being, we learned to know how in art man becomes one with divine creative power, if this, and not imitation, is the source of his own creative activity; we learned how the Divine-spiritual lives and moves within man as abundance of power if he becomes conscious of his connection with the universe. By giving form and mould to what lives in cosmic laws, by dint of inner penetration of spiritual connections, man creates art that is born from the depths of the universe and his own being. This is no mere hearkening to the secrets of nature; it is a fathoming of the hidden spirituality active behind nature. A fiery power thrilled through Rudolf Steiner's words and gave us life. We were able to feel how ancient civilisations had arisen out of these impelling forces of art and how in our spiritless age of disenchantment, degeneracy and barreness, the same possibilities are once again offered, at a higher stage, at the stage of conscious knowledge. A fire of enthusiasm thrilled through us and gave our artists strength to work, year in and year out, with chisel and mallet at the wood, with diamond drill at the glass of the windows, each of a single colour and shining only in different colours at their different positions in the Building. Both inside and outside, the Building stood there as a masterpiece of art created by a human hand; the relief-modelling of its inner surfaces might well be an organ for the speech of the Gods; its windows showed in the coloured shades of their designs the way to the Spirit, the stations along the path to the spiritual world. Those walls that became living through the movement in the forms, those light effects that were charmed into the windows by the thickness or thinness of the glass surfaces, called to the soul, now also stirred to action, to tread the path to regions whose speech flowed through the ethereal forms in the wood, through the windows which linked the outer and inner worlds together in a music of spiritual harmony.

All earlier buildings pointed to a connection with the earth, they rested within the earthly forces; here the walls were living, inducing exaltation and deepening alike, portraying an onward flowing evolution.

“Thus, O Man, thou findest the way to the Spirit!” — This was what spoke from the forms and windows of the Goetheanum. Gothic architecture contained the prayer: “O Father of the Universe, may we be united with Thee in Thy Spirit.” The hidden Spirit permeating man makes him able to experience the world in forms and movements which to-day confront us like riddles. Rudolf Steiner expresses the thought of the new art of architecture in these words: “We enter with reverence into the Spirit, in order that we may become one with the Spirit which pours out around us in the forms and enters into movement — for behind the Spirits of Form stand the Spirits of Movement.”

To-day, the inner, living growth of man's being would fain come to expression in a building art which in ancient Greece created the dwelling place of the God, and in Gothic times the house of the community in prayer.

The lectures in which Rudolf Steiner thus spoke to us of the new style of architecture, of the art of relief and of the nature of colour, are only available in imperfect, incomplete transcriptions. Sketches made at the time are in many cases missing, as well as quotations which after this long lapse of time can no longer be found when a name had by chance escaped the stenographer. Yet so great is the abundance of the revelations, both in a spiritual and artistic sense, that I feel it my duty to make them accessible to the world. The series of these lectures was broken by the World War, to which the sorrowful utterances of the last lecture point as if prophetically. One after another our artists were called away to the scene of war. With very few exceptions, there remained only those men who belonged to neutral countries, and the women. In the early days of the war, Rudolf Steiner gave us a First Aid Course. For four years we heard the cannons thundering in neighbouring Alsace and they were the terrible daily accompaniment to the beats of the hammer in a work of peace and human brotherhood. Rudolf Steiner's constant thought and heart-rending care during this time was the bringing to pass of peace, of an understanding for its necessity, but his warning voice was unheard. In spite of the deep sorrow into which the tragedy of world happenings plunged him, the words he spoke to those who were working at the Building were as full of light and as kindly as the doors he moulded, as the staircase that called out its welcome to those who entered, crying to them to be fully Man in the service of the radiant, sun-lit power of the Spirit.

In order to give an impression of these stairways, these doors and relief motifs, a series of photographs has been added to the lectures. The first shows the Goetheanum with its double domes in the blossoming time of the Jura countryside. This interpenetration of the two unequal sized domes called forth the astonished admiration of architects and engineers. It was a mathematical problem which they felt themselves wholly unable to solve. A well-known architect from California, who lad constructed many great public buildings there, could not say enough in admiring appreciation: “The man who has solved this problem is a mathematical genius of the highest order. He is a master of mathematics, a master of our science: from him we architects have to learn. The man who built this has conquered the heights because he is master of the depths.”

Here too, as in other spheres, experts recognised their master in Rudolf Steiner.