The Philosophy of Freedom
GA 4 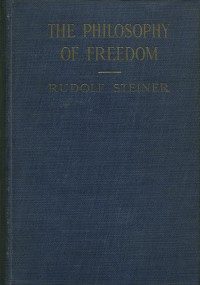 This is the first English translation and the only one sanctioned by Rudolf Steiner himself. Joint translators Prof. and Mrs. R. F. Alfred Hoernlé were selected for their outstanding qualifications. First published in 1916, it is based on the original 1894 German Die Philosophie der Freiheit. Other translations have been based on the 1918 revised German edition. It includes inspiring passages about individualism that were removed from the book in 1918 and are missing in later translations: “We no longer believe that there is a norm to which we must all strive to conform. Nothing is accepted as valid, unless it springs from the roots of individuality. The saying “Each one of us must choose his hero in whose footsteps he toils up to Olympus” no longer holds for us. If only we probe deep enough into the very heart of our being, there dwells something noble, something worthy of development.”