The Festivals and Their Meaning I:
Christmas 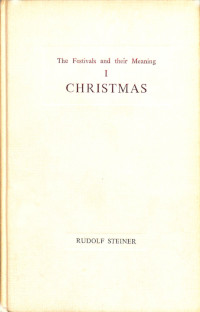 This volume is a tremendous help for participating in the deep spiritual realities behind the Christmas festival. Throughout his life Steiner talked about a modern spiritually conscious approach to the festivals of the year. Here is a compilation of what he had to say at various times about Christmas.

These eight lectures were given by Rudolf Steiner at various cities in the years 1904 through 1922. They were given to audiences familiar with the general background and terminology of Steiner's anthroposophical teaching.

Records exist of some 48 lectures given by Rudolf Steiner between the years 1904 and 1923 on the meaning and significance of the Christmas Festival. The present volume (Volume I of a series) contains the texts of eight of these lectures. Volumes II, III and IV of this series on The Festivals and their Meaning contain the texts of lectures by Rudolf Steiner on Easter, Ascension and Pentecost, and Michaelmas. Translated by Dorothy S. Osmond