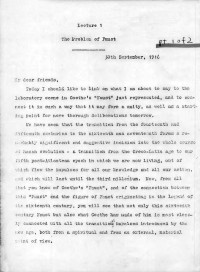 These lectures were given by Rudolf Steiner in Dornach at various dates from 1916 through 1919. They are grouped and titled, Spiritual Scientific Note on Goethe's Faust Vol. II, and are published in German as, Geisteswissenschaftliche Erlaeuterungen zu Goethes “FAUST”. Band II. Das Faust Problem. Die Romantische und die Klassiche Walpurgisnacht.

This is a typescript edition of these lectures and is entitled, The Faust Problem. The Romantic and the Classical Walpurgis Night. Some of these lectures were published in the weekly journal, “Anthroposophical Movement” in the Fall of 1930, while others were on typed pages. Translated by George Kaufmann and edited by Harry Collison.