Lectures to Priests: The Apocalypse
GA 346 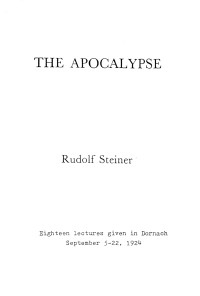 John's Book of Revelation ‘the Apocalypse’ has been subjected to countless interpretations by theologians over the years, mostly based on theory and speculation. In contrast, Rudolf Steiner spoke from his own direct experience and knowledge of the spiritual truths contained in St. John's mysterious pictures.

These 18 lectures were given by Rudolf Steiner at Dornach in September of 1924. They make up the entirety of the lecture series entitled, The Apocalypse, published in German as, Apokalypse und Priesterwirken.