The Philosophy of Thomas Aquinas
GA 74 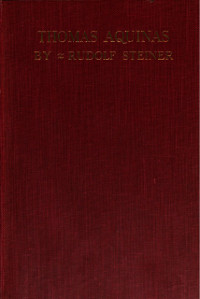 A deep study of Thomas Aquinas and Augustine, the essence of Thomism, and Thomism in the present time. Also included are appendices and supplemental material by the translators. As British Weekly reports, "Every page contains thought at a high level."

Three lectures given by Rudolf Steiner at Dornach in May of 1920. They are from the lecture series entitled: The Philosophy of Thomas Aquinas, published in German as: Die Philosophie Des Thomas von Aquino.

Part One is the three lectures by Dr. Rudolf Steiner. Part Two is commentaries on some passages from the works of Thomas Aquinas by Dr. Roman Boos. Translated by Harry Collison