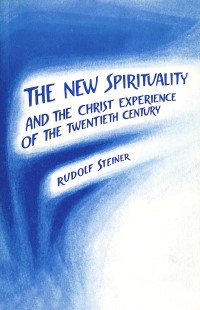 The constitution of the human soul has undergone a tremendous evolution since the 15th century. “I” consciousness and individuality have emerged as central to the life of soul along with intellectualism and the possibility of free will. At the same time the intensity with which the human being experiences knowledge has declined along with the old clairvoyance. The time is now ripe for the awakening of new forces of spiritual perception with which humanity will perceive the working of Christ in the etheric world.

These seven lectures comprise the entire contents the lecture series emtitled, The New Spirituality and the Christ Experience of the 20th Century. They were published in German as, Die Neue Geistigkeit und Das Christus-erlebnis des Zwangzigsten Jahrhunderts.