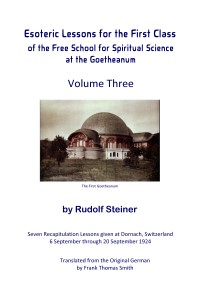 By the time Rudolf Steiner had given the first nineteen First Class Lessons (Volumes One and Two), so many new members had joined, or wanted to join, that he felt it necessary to recapitulate the lessons already given rather than continue to advance. However, although the mantras (verses) used are the same as in Volume One, the descriptions are sufficiently different to justify a new volume. Furthermore, much new and valuable material is introduced, which is not in the previous volumes.