The Social Future
GA 332a 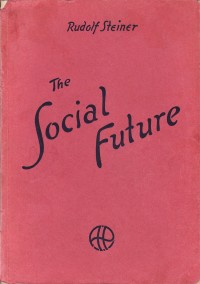 As part of Steiner's intense activity in the social field in 1919, these lectures show that a healthy social organism depends on the separation of the three spheres of society: the cultural sphere including art, science, religion, and education; the legal-political sphere; and the economic sphere. This membering into three spheres will overcome the polarizing tendencies of modern life and make the economy the servant of society rather than its master.

Six lectures by Rudolf Steiner, given at Zurich in October, 1919, with an Introduction by Bernard Behrens in August of 1945. Authorized translation from the German of Notes unrevised by the lecturer. Published by kind permission of the Rudolf Steiner Nachlassverwaltung, Dornach, Switzerland.

Lectures 1 through 6 from the lecture series: The Social Future. Published in German as: Soziale Zukunft.